I have been using the white iPhone 5, 64Gb on AT&T for about 6 weeks. In this time, I have been able to get a good handle on how this device works.  There are a few likes and dislikes about this phone compared to the iPhone 4. This includes the fabled new maps application, find my friends, and widescreen retina display.

I upgraded from my trusty iPhone 4 one week after the official release of the Apple iPhone 5 to retail stores. I was super excited to get my hands on a phone that had the promise of being the best iPhone yet. Some of the features that I was most excited about was the faster processor, taller screen, and the updated maps application. Here is the excerpt from the State of the Apple iPhone 5 article in September. 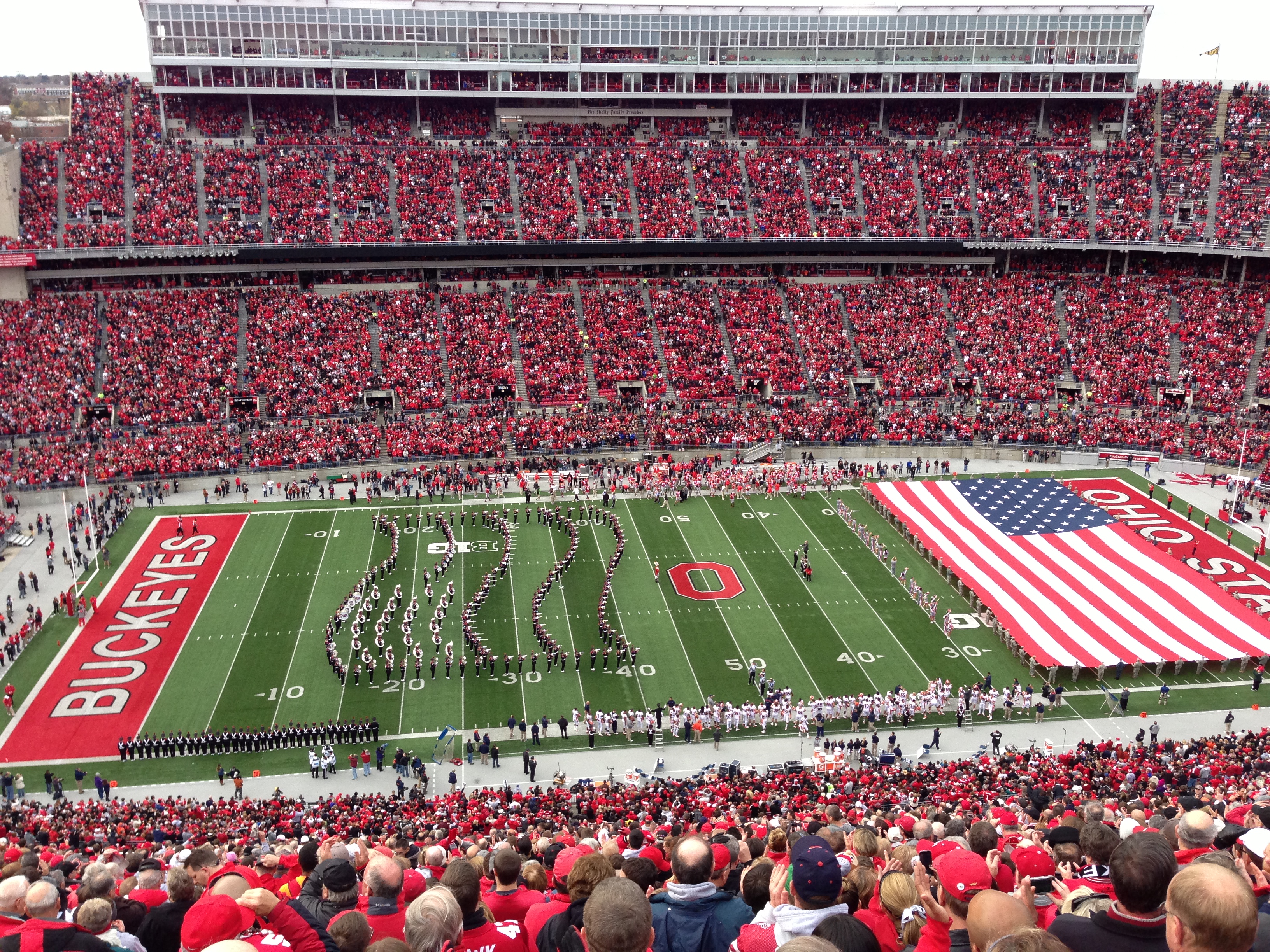 Example photo of the iPhone 5. This picture was taken at the Ohio State vs. Illinois game on 11/6/12, 2 rows from the top of the stadium.

Some of the new features live up to their hype while others do not. The new phone is exceptionally fast. It never struggles to keep up with what you are doing. The phone has been very responsive since the start. The new widescreen display makes widescreen videos look fabulous while the apps that are designed to take advantage of the longer real estate seem more usable. The new upgraded 1080p camera takes fabulous movies and pictures. The slimmer phone design fits great in your pocket as long as you get a slim case for it. I am using the white Poetic Atmosphere case which has proven to keep the new iPhone’s slim feel without the loss of the case’s durability. The only blemish on this case is that it gets dirty from being in your pocket and does not seem to clean off very easily.

The maps application has received a number of complaints, enough so that Apple released an official apology for the lack of quality in this product. See here for the official note from Tim Cook. I asked a client about their experience with the new Apple maps and he stated that it had dropped them off in the middle of a highway and even in a corn field one time. After I heard about the complaints, I decided to test the maps application against the maps application on the SIII during the same trips. These trips included short 10-25 minute drives in the Columbus Ohio area to 2 hour drives up to Cleveland and even one long ride to Kentucky. The Apple maps did not fail me once, where the Galaxy SIII failed me a handful of times. Even to know that the maps has failed others, I feel that Apple did a great job with the design of the application and hope that most of the complaints are addressed in the upcoming iOS 6.1 update that is currently in beta.

Find my Friends is an app that has been a staple in keeping my wife and I connected. With the amount of traveling I do in one given day, it allows my wife to see how far away from home I am so that she can expect me to be home early or not. We have been using this application for almost 2 years and it had always worked flawlessly. On the iPhone 5, I tend of have updating issues were it will show her at work when she is in fact at home. On my iPhone 4, I could hit refresh multiple times in a row which would almost simulate a real time tracking of her while she would be on the drive home. The iPhone 5 does not update fast enough as it sometimes takes a few minutes before the location is refined. I have not seen much on this issue and hope that it is something that will also be updated in the iOS 6.1 update.

Apple did release a 6.0.1 update of iOS a couple of weeks ago which addressed a few issues I was having. The first was that the flash on the camera would not always work. It would flash either early or late. I had to resort to taking photos with the flash turned off. There was also an issue where the phone would lose connectivity to the cellular network sporadically. I am still experiencing this, but not as much as before the update.

The screen sometimes feel like it is not receiving input from my figures. There are reports of multiple diagonal swipes causing input issues on both the iPhone 5 and new iPod. This article explains the issue and has a video showing the differences in this input versus the iPhone 4s. I started to notice that the input disn’t seem to be 100% when I started to play the new Angry Birds Star Wars. I do have the invisibleShield (Smudge-Proof) installed on my iPhone and it could be contributing to the input issues I am experiencing.

My final complaint with the new iPhone is the quality of the case. Apple decided to switch to aluminum to help cut down on the weight of the device. This material is susceptible to nicks and scratches as was quickly realized when I pulled the phone from the box for the first time. The beveled silver edge around the phone had a scuff on it already. There were reports of others having scuffed phones out of the box. It looks like the black model suffers more from nicks then the white model does. Knowing this, it made me buy a case and protective screen shield much faster then normal. Besides the nicks and scratches, the new aluminum design does give the device a cheaper feeling, especially if compared to the iPhone 4 and 4s.

Overall, I am very satisfied with the new iPhone 5. I do feel that the overall design feels cheaper, but I chalk that one up to the lighter design. There are a few issues with some of the applications. Some issues were addressed in the iOS 6.0.1 update released a couple of weeks ago and others will hopefully be addressed in the upcoming iOS 6.1 update. I recommend the iPhone 5 to anyone looking to replace their current iPhone 4 or older as the upgrade is quite noticeable, especially with the overall speed of the device. The application issues are easily fixable with the software updates, and we all know that no product is perfect.