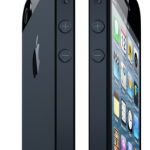 The official photo of the new iPhone 5 from Apple’s website.

The new Apple iPhone 5 is similar to its predecessors, the iPhone 4 and 4s, in design as it sports the similar boxy style. But those simularities end there. The new model does away with the glass back and is replaced by an aluminum backing etched with the familiar Apple logo. The front is touch sensitive glass where the touch sensor is integrated into the glass to help slim the thickness of the device. The screen is now 4 inches diagonally, but is the same width as previous devices. The added length will allow the home screen to display 5 rows of applications instead of the previous standard of 4. Apple stated that the device is 18% less thick and 20% lighter then the 4s.

Applications can be updated to take advantage of the taller screen, but can also maintain their proper aspect ratio if they are not updated. Of course, the Apple applications like Garage Band and iTunes will be updated. Apple also boasted that the screen has 44% more color saturation, which they believe is the most accurate display in the industry.

Apple even upgraded the back camera to 8-Megapixals and 1080p HD video recording. The camera is 25% smaller, sports a f/24 aperture, and has backside illumination. They have added a new dynamic low light mode that should improve low light photos; a sapphire lens has also been added to help protect the camera. The phone will also allow you to take a panoramic photo using a sweeping motion. The front camera will now do FaceTime in 720p.

EarPods for the iPhone 5.

There are now 3 microphones to help improve sound, and the device will support wide-band audio to help phone calls sound more natural. Apple has reduced the size of the speakers while improving the quality of the sound. The earpiece has built-in noise-cancelation technology. New ear buds called “EarPods” will replace the standard headphones to which we are so accustomed. These new headphones are supposed to produce better sound and comfort while in your ears.

The 9-year-old dock connector is going away and will be replaced by the new 8-signal “lightning” connector, which is supposed to be more durable and reversible. There is news of an adapter that will allow it to support the older 30-pin model.

iOS6 on the iPhone 5 will improve Siri. She will help you complete tasks, post Facebook status updates, and provide the latest sports information. 3D maps with turn-by-turn navigation, updated iTunes store, and improvements to Safari are also to come. FaceTime will not only work over wifi, but also over the cellular data connection.

The device will be released on Verizon, Sprint, AT&T, and T-Mobile in the US, along with other carriers overseas. Battery life is expected to be 8 hours on 4G LTE and around 10 hours on wifi. Wifi has been improved to support a/b/g/n at a maximum of 150 megabits per second.

All of this is powered by the A6 chip, boasted to be 2x faster than the A5.

State of the Apple iPhone:

After Apple announced the new iPhone 5, I began to see tweets of people saying that they were not impressed and that all Apple does is build hype. To some degree, they are correct. Apple does build hype around products very well, and it is expected since the release of the original iPhone. They promote their product so well that people are willing to stand in line for hours, even days, at a time.

What about this phone? Will it revolutionize the smartphone market? The short answer is no. What it does is update the product to be more in-line with the features of other competing products. Apple likes to take their time when adding new technologies, as is the case with adding LTE to the iPhone 5, but not to the 4s like people wanted. It gave them time to design a chip small enough to fit in their phone. Apple wants to make a product that people know will perform properly, and although there are a few issues here and there, they seem to be on the right track.

Upgrade Go Ahead and Conclusion:

If you are thinking about spending your entire week’s paycheck on the new iPhone 5, make sure that the new features satisfy. For me, my iPhone 4 was good enough not to upgrade to the 4s when it was announced last year. Because I did not upgrade, I am eligible to upgrade this year and plan on doing so. Why? Because I like the idea of the faster processor and faster 4G network support.

The iPhone 4 has slowed. I expected slower speeds when I used my phone upon upgrading to iOS5 last year. Granted, the phone has had its fair share of slow downs, but overall, it has performed well running the new software.

The new data networks based on 4G will allow me to stream videos much faster to the device then I can currently. I love to use Air Video to stream different videos that I have on my home tower, and being able to jack up the quality would be a nice thing. Outside of that, the 3G speeds have done well with normal internet browsing and streaming of audio.

The one thing that I am looking forward to on the app front is the updated Maps application. I use navigation on my Galaxy SIII and it has been fairly decent compared to a Garmin or Tom Tom. The less devices I have to carry, the better I feel.

The final reason why I would upgrade my iPhone to the iPhone 5 is that I love the overall feeling of the device in my hands. This has no functionality purpose, but to me, I don’t want my device feeling cheap. That has been my complaint on the Samsung. Plastic feels cheap and can even crack more easily than aluminium. When I hold my iPhone 4, it has some weight to it. It simply feels like a solid device. This does not mean that it is harder to break; we all know that is not true.

Will I be waiting in line to purchase this new phone on September 21st? I will not be. It will probably be about a month or two before I officially pick this device up for my own personal use. Do I recommend to purchase this new phone? I do, but make sure that it is what you want. The Galaxy SIII and the new line of Motorola Droids coming out in October should not be overlooked, especially if cost is a factor.